If you still have problems, please let us know, by sending an email to support@website.com . Thank you!

Come for the food, stay for the shows at the fair

Come for the food, stay for the shows at the fair 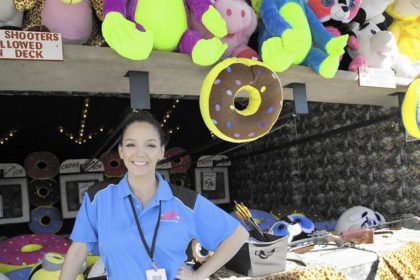 The South Florida Fair is back in town, and with rides, farm animals and a variety of fair food, there’s something for everyone.

But with so much to do, how does one decide to spend time at the fair?

Walking around there is a plethora of food stands from which to choose. There’s the typical fair food like popcorn, funnel cake, nachos, corn dogs and lemonade.

But for a change, look for a black-and-red booth with flashing red lights: Bubba’s Bacon.

“It’s like eating pork belly on a stick. It’s very good,” Bob Pedraza, of Jupiter, said. “We were heading elsewhere and I said, ‘Oh, bacon. Got to stop.'”

“I wanted to do something really unique so I could do large events,” said Falcon. “Bacon is definitely unique and the way I do it, I think, is one of the most unique ways.”

After eating all that food it’s time for some refreshments. Fairs can have some pricey drinks like $3 for a water bottle or $3.50 for a lemonade.

“We do eight different flavors and can go up to 30 combinations of flavors,” said Michael Spano, co-owner of Mama Jugs. “You buy a 32-ounce jug with free refills all day once you pay. So you pay $6.50 and you’re done for the whole day.”

Though co-owners, Spano credits Kelly Elliot for coming up with the idea of Mama Jugs.

“We used to come to these [fairs] all the time and we could not believe the amount of money that people had to spend on drinks,” Spano said. “So the bottom line was we decided to come up with a concept, free refills all day long, and that’s what we did.”

With flavors like Rockin’ Raspberry and Wango Tango Peach Mango, and with three different booths to fill up one’s jug, fair goers can quench their thirst for iced tea.

Carnival rides are nothing new at a fair but what about a Bengal tiger? At the new Bengal Tiger Encounter, fair goers are treated to not just one, but four beautiful tigers.

Born and breed in captivity, these giant cats have all their teeth and claws but act like a bunch of lazy house cats. Performing three shows on the weekends and two during the week will do that to a tiger especially after being fed pieces of meat as their reward for doing a trick.

Throughout the show trainers show off the tiger’s beauty and power while the announcer explains some interesting facts about the big cats.

“I didn’t know that soon they won’t be in the wild anymore,” 11-year-old Alec Anzalone, of Wellington, said about the tiger encounter.

“I didn’t know that there can many different colors in one breed,” said 12-year-old Daniel Heller, of Wellington, whose favorite was the white tiger.

Both boys were impressed with the cats and their growling.

“This is really cool,” Alec said.

“We do about five or six other fairs,” tiger trainer Felicia Frisco said. At age 21, Frisco is one of the youngest tiger trainers in the country.

From the exotic to the adorable and off the beaten path is the Ham Bone Express 3 Racing Pigs.

“We’ve been coming out here for three years and people seem to love it,” said Charlie Bogar, owner of the Ham Bone Express 3.

With 17 pigs, the show is divided up into four different races all with different themes. There’s the pigs from Hollywood, Calif. in their fancy racing numbers and the political pigs with names like Barack’o’ribs Obama. Each race has four cheering sections with a designated child cheerleader to allow for the most children to have fun and a chance to win a prize.

“We try to put some of that in there for the adults to put a little humor for them,” Boger said about some of the pigs’ names. “The main goal is the make the kids laugh and get them screaming.”

“I love the race and I was happy I was able to get called and I won a prize,” said 12-year-old Zykeria Edwards, of West Palm Beach.

Full Article | Sun-sentinel.com – Come for the food, stay for the shows at the fair

What you can read next 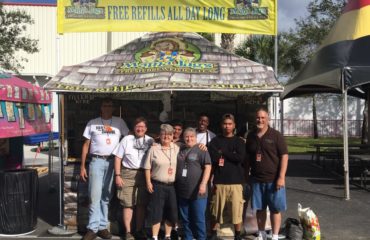 Please fill this form out and we'll get back to you as soon as possible!